From Frustration To Success: City of Britt Proactively Implemented A Strategic Plan With The Community Involved In The Process 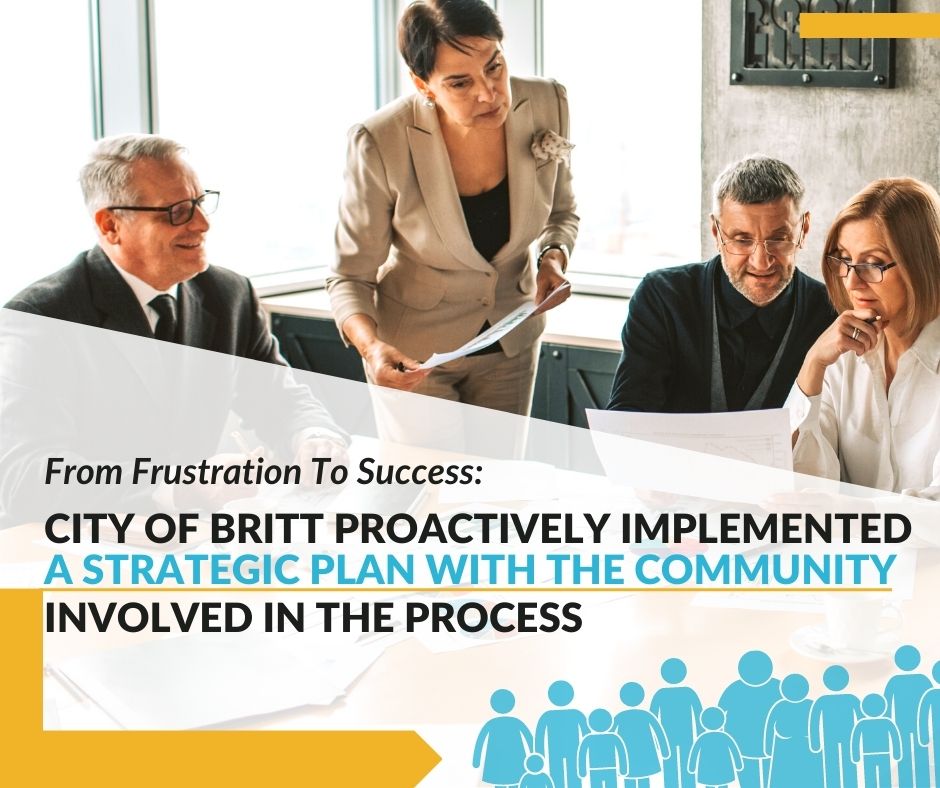 The City of Britt is a small rural community in North Central Iowa with a population of just under 2,000, and yet it is the second largest city in Hancock county. It is relatively changing and progressing particularly because of the livelihood opportunities surrounding the towns. Most of the population is employed in the school and the hospital, and the rest are in the manufacturing or agricultural industry.

The city had not done a Strategic Plan in close to 10 years and its effect is evident with the current challenges it is facing. The city council has exerted a great amount of effort to make the city grow by adding lands for housing and commercial parks, however those properties were not able to gain profits in any way. Despite all the efforts, streets in the city are rapidly declining. The sewer lines that run under the streets are past the recommended replacement date and would cost the city over 4 million dollars. The city does not have the capacity to take on that amount of debit. The only option is to wait until the fund for the street and sewer repairs has been raised. Moreover, new regulations by the state DNR mandated the city to update and recondition their water treatment plant. In order to fund this project means significantly raising the water rates on their residents. The residents are now getting frustrated. The council feels they are chasing issues rather than being proactive and preparing for them.

HueLife facilitators relied on a variety of techniques to help create a common vision and strategies to achieve it.

The City Council went into this process with some anxiety that the community would be focused on the infrastructure needs that they are unable to take on at this time. They were pleasantly surprised that what emerged were strategies around engaging & empowering residents, being proactive, and developing the business community. For example, within weeks of the Strategic Planning session the City Council started rotating one meeting a month to be held in places throughout the community to make city council meetings more accessible. “Happy Hour with the Mayor” was launched to provide a less intimidating way for city residents to engage with the Mayor on issues. Both initiatives led to an immediate success in that they identified that residents were in favor of a short-term fix for one of the city streets where repairs were badly needed despite knowing that the street would soon need to be torn up and completely replaced.

Throughout the planning process there was support for engaging the Hispanic community. A young, Hispanic woman was hired as the Assistant City Administrator as a result. This further led to the identification of the need for translation services for Hispanic residents within the community.

Strategic Planning allows the city to be proactive rather than reactive. It also increases the efficiency of the management and it establishes a direction which will help it sharpen its focus in order to get to the goal. Using correct approaches and methods, strategic planning will be less stressful for the management and the community.

Who should consider this training?

This website is currently being updated for ADA section WCAG 2.0AA compliance click here to let us know how we can improve