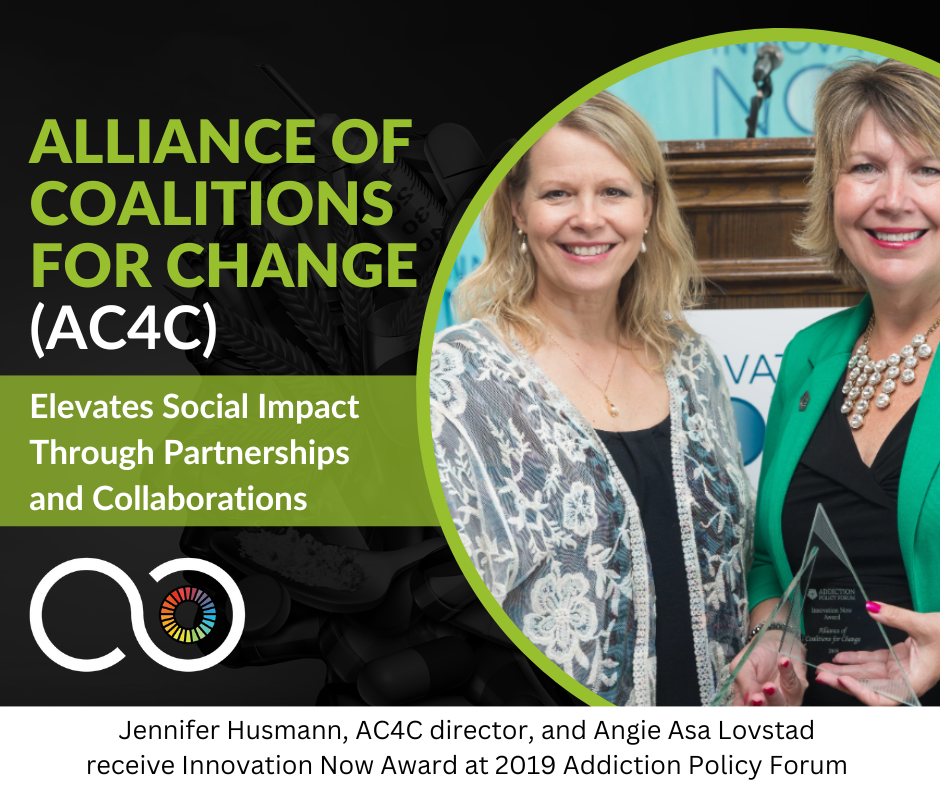 Iowa has numerous nonprofit substance misuse prevention coalitions across the state that were working primarily within their local and individual communities. Several leaders recognized that they could pool their resources and knowledge to benefit each other and have a wider impact. The Alliance of Coalitions for Change (AC4C), led by two part-time employees and countless volunteers also saw an opportunity and pushed for a partnership that would heighten the individual impacts the local coalitions were having,

The primary goals of AC4C are to encourage collaboration with youth in local communities, form partnerships with community stakeholders, and engage government officials. Furthermore, the AC4C encourages the disparate groups around the state to articulate and repeat the same key messages. Partnerships and collaborations will create sustainability of the programs, will build trust from partners and candidates, will keep the community engaged and involved, will raise awareness to substance abuse, and will create a meaningful change to the community.

Uniting people of diverse interests and backgrounds can be a challenging task. In the state of Iowa, numerous local communities were funded by federal Drug-Free Community Support grants and other sources to fund their efforts around substance misuse prevention. As this work continued, accessing these funds became more competitive. Other issues may arise and pile up if the root concern will not be addressed immediately and properly. Questions around sustainability and capacity needed answers, but with diversity causing communication issues, delays on projects, that will eventually create bigger conflicts – urgent guidance and help is needed. A new model – a state-wide coalition – was one option for moving forward. With each local coalition comfortable with the status quo, however, this new coalition, led by AC4C, needed to communicate the “why” for the collaborative model and the roadmap that would lead to a successful collection of coalitions who were able to serve the state in new and innovative ways. Aligning the diverse interests of each of the local coalitions was also a challenge AC4C faced.

Hue Life Facilitators relied on a variety of techniques to help craft and then steer people toward a common set of goals.

Currently, 30 coalitions, across 35 Iowa counties, make up AC4C. Of these coalitions, 36.7% have joined AC4C over the past five years. Coalition members, school-aged volunteers, and other state partners gave 93,710 volunteer hours to AC4C efforts from 2014 to 2018, equivalent to over $2.2 million of in-kind contributions. Ultimately, AC4C became an asset to the local coalitions in developing connections beyond their local networks. These expanded networks include people in powerful positions at the state level and provided the ability to align legislative agendas around prevention and into a unified state-wide initiative.

“AC4C came along as a statewide community-based organization and it was a great opportunity for coalitions that were on their own to share their successes and failures. In addition, they could speak with a unified voice. AC4C took the coalition to the next level – very timely to work at the state level.”

Who should consider this training?

Nonprofits and others who want to band together to tackle shared challenges collectively, pool resources and efforts for the greater good, and develop strategic and communication plans that provide the means and motivation necessary for making changes and accomplishing shared goals. Training should be a regular activity for AC4C and other organizations-with-causes. It will help them improve the overall system and programs in place while adapting to the changes happening not just in the society or in the program candidates, but also with the people involved and working behind these projects.

This website is currently being updated for ADA section WCAG 2.0AA compliance